Saint-Sauveur, December 3, 2018 – Les Sommets honoured its devoted instructors at its official instructor gathering last October at Sommet Saint-Sauveur. On the occasion, the Georges Dufour & Suzanne Bergeron awards were bestowed in the Bâtisseur and Relève categories.

In recognition of an instructor’s longevity, the passion he or she has shared with thousands of students throughout the years and their love of ski, the Georges Dufour & Suzanne Bergeron “Bâtisseur” award was this year given to Richard Bélair of the Sommet Gabriel Snow School. For nearly 40 years, Richard has stood out for his unwavering perseverance. Whether he was obtaining his Level 4 certification, creating instructional videos or organizing a ski carnival, no challenge was too daunting for Richard. Creative, authentic, humble and passionate about his sport, Richard is especially known for his warm smile, which has been hugely appreciated both by colleagues and his many students. Even after all these years on the slopes, his love of ski still colours his daily life. Indeed, there’s a rumour going around that he might be starting preparations for the Snow School carnival a full year ahead of time!

The “Relève” award: A women’s double

This year, Les Sommets gave its 2017-2018 Georges Dufour & Suzanne Bergeron “Relève” award to two exceptional women instructors, Amélia Bernard and Stéphanie Desrochers, both with the Sommet Morin Heights Snow School. These two close friends grew up on the slopes. They went through the apprentice instructor course together before becoming instructors. For every weekend over the past nine years, the two women have worked as supervisors at the snow school. All the way through high school, college and university, they were able to juggle these two aspects of very busy lives. But what truly sets Amélia and Stéphanie apart is their incredible generosity of spirit. Each year, they are involved in training new instructors, organizing events, and learning new teaching techniques. The mountain led them to create a lasting friendship born of a mutual passion: skiing. 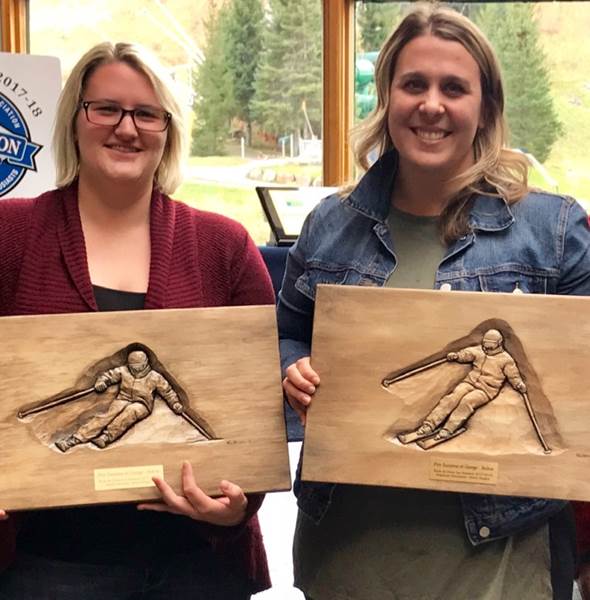