Saint-Sauveur, October 22, 2022 - A monument to the memory of Louis Dufour, a major force in the development of Quebec's ski and tourism industry, was unveiled this afternoon on Côte 70 at Sommet Saint-Sauveur. An owl, synonymous with wisdom, was chosen to represent the pioneer; carved in stone, it will continue to watch over the Saint-Sauveur valley for generations to come. The work was created by artist Jean Bisson Biscornet and ideator Geraldo Pace, both of whom were present for the ceremony. "I wanted to find something that represented Louis, but more importantly what he brought to the table through his relationships with his loved ones and the community. The owl is a wise animal with impeccable vision. It captures his soul and the importance he had for the region", said Mr. Pace on the day of the unveiling.

Family and friends of Louis were present on the mountain for the occasion. Béatrice Hébert, Louis-Philippe Hébert and David Dufour each took the microphone to talk about Louis from different angles, namely his involvement in the company, his importance to the ski industry in North America as well as his link with the monument. The said monument was then unveiled by the Dufour family. Musicians played classical music; combined with blue skies and temperatures approaching 20 degrees, the setting was truly enchanting. "We are proud to have been able to realize this monument in collaboration with two local artists. It will be, as Louis would have wanted, a magnificent gathering place with a superb view of the valley he loved so much," said Louis Philippe Hébert, President of les Sommets.

With Louis watching over the mountain, we are ready for the winter of 2022-2023. We look forward to seeing you on the slopes very soon! 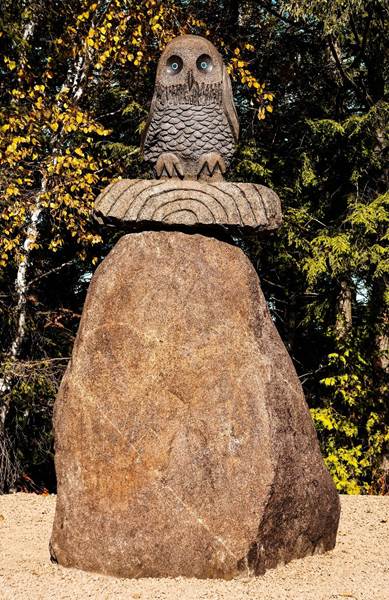 Jean Bisson Biscornet
Originally from Val-Morin, Jean Bisson Biscornet moved back to the Laurentians after learning and practicing stonework overseas. From his studio in Val-David, he creates singular works: often resulting from experiments and amalgams of materials, his art is linked to the life that surrounds us. His work can be found in Nunavut, the United States, Switzerland, Bretagne, Ontario and Quebec (artistesartisans.valdavid.com)

Geraldo Pace
A good friend of Louis Dufour, Geraldo Pace has been very successful in his professional career over the years. Leaving fashion photography behind, he devoted himself to commercial and conceptual photography. In addition, he immortalizes portraits and participates in corporate projects and collaborations with other artists who call upon his creativity. "Despite my experiences - and perhaps because of them - I have preserved my sense of wonder. When I am looking for a new source of inspiration, Nature provides." (geraldo-pace.com)

A monument in honor of Louis Dufour